An ice dam is created under winter conditions when heated air leaks through attic bypasses into an unheated attic. This creates warm areas on the roof and melts the underside of the snow that has accumulated on your roof. The melted snow flows down the roof until it reaches a cold spot, such as the eaves, where it refreezes, forming a dam. 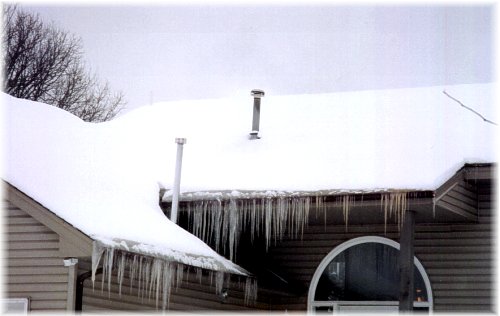 
Click HERE to see our Gallery of Ice Dams and Hot Spots!

Behind this dam more snow melts causing the ice to keep building up. Eventually, the ice dam forces water (melted snow) to back up under the shingles, damaging the shingles, and allowing the water to leak down to the ceilings and walls below.

Additionally, ice dams may also cause mold and mildew to form in attics and on wall surfaces.

Ice dams - or ice buildup on roof eaves - are all too obvious and all too familiar to Minnesota homeowners. The shelf of ice along the eave and the icicles are clearly visible, as are the dislodged roof shingles, sagging gutters, damaged insulation, and water stains on interior ceilings and walls that are the result of ice dams.

What isn't clearly visible is what causes ice dams.

Causes of Ice Dams
In most cases, ice dams begin inside the house, when heated air leaks up into the unheated attic. In the winter, the roof above the unheated attic is cold. When warm air leaks into the unheated attic, it creates warm areas on the roof which in turn cause the snow on the exterior of the roof to melt. The melting snow moves down the roof slope until it reaches the cold overhang, where it refreezes. The process continues, causing ice to build up along the eaves and form a dam. Eventually this dam forces the water to back up under the shingles and sometimes into the ceiling or wall inside the home. In addition to the roof and water damage described above, ice dams may cause structural framing members to decay, metal fasteners to corrode, and mold and mildew to form in attics and on wall surfaces.

Other common sources of attic bypasses are:

Other factors sometimes play a role in Ice Dams...
Complex roof construction can increase the risk of ice accumulation, such as a roof with different surface angles that vary in their exposure to sunlight and drain into valleys. Weather also contributes to the problem: a foot or more of snow on a well insulated roof, combined with warm winter temperatures, can result in snow melt and ice on roof eaves. In the latter case, applying a sidewalk snow melt product or having a roofer steam the snow off may be the safest means of removing ice. In each case, however, the most important step to stopping ice dams is to seal the hidden air leaks into attic spaces. If the principal causes was "the wrong type of weather," every roof would have an ice dam. Observing unheated garage or picnic shelter roofs confirms that weather is not a basic cause of ice dams.

Sealing Bypasses after Construction
Diagnostic services. Both builders and homeowners may seek the help of technicians trained in using diagnostic equipment to identify sources of air leaks. A blower door test and an infrared scan can locate major leaks in houses and help determine whether they have been sealed effectively.

Some Non-Solutions to Ice Dams
Increasing insulation and/or roof ventilation. Adding insulation helps reduce ice dams, but once you have reached an R-44 level, there may be little value in adding more insulation. Adding insulation without sealing attic bypasses could actually increase the amount of air leakage, diminishing the performance of the insulation. Roof vents are required by all building codes and should be installed according to building code standards. They are not, however, a solution to ice dams. One caution: using power ventilators such as attic fans or other motorized devices can depressurize the attic, drawing warm moist air out of the house and into the attic.